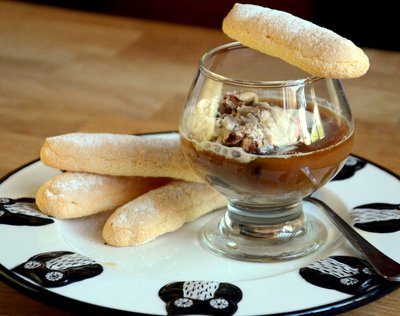 A tiramisu is a popular Italian dessert made with ladyfingers soaked in espresso and layered together with rich cream. It’s known as a “pick me up” because of all the coffee that is used in the recipe, though it never hurts to get a little bit more coffee into the picture. I recently picked up a container of  Breyer’s Tiramisu Gelato, which is new flavor from the ice cream maker. It definitely captures that coffee and cream tiramisu flavor, but it also has pieces of ladyfingers in it to give it a little texture and to really tie it in with traditional tiramisu. I decided that this gelato was a great candidate for one of my favorite coffee desserts, the affogato.

I simply placed a scoop of the gelato into a small dish, dusted it with cocoa powder and poured a shot of hot espresso over the top. I added the cocoa powder because tiramisus are traditionally finished with a dusting of cocoa powder, and you’ll get a nice chocolate aroma when you pour the espresso over it. When I took a taste, I still got the cream flavor from the ice cream, but the coffee stood out even more. Those pieces of ladyfingers also kept their texture while soaking up espresso and melted ice cream, for a dessert that tasted rich and like it took a lot more time to make than it really did!

You can get a similar effect by using half a scoop of vanilla ice cream or gelato and half a scoop of coffee if you don’t have or can’t find the tiramisu gelato, though that is the way to go if you have it in your local market. I highly recommend picking up some ladyfingers to serve alongside your affogato, since extra ladyfingers are perfect for soaking up the affogato as it melts.

In a small bowl or dessert cup, place your scoop of ice cream. Dust with cocoa powder. Pour hot espresso over the ice cream and garnish with a ladyfinger.
Serve immediately.

Tags: affogato, dessert, espresso
Related Posts
Honey Vanilla Tea Latte
Honey is a classic sweetener for tea. I find that…
Cherry Green Tea Iced Tea
One of my favorite iced teas is the japanese cherry…
Cafe Vanilla with homemade vanilla syrup
At some coffee shops, a “cafe vanilla” is another name…