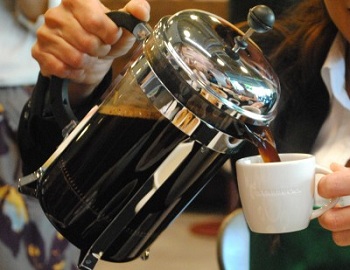 When you order a french press at a coffee shop, you expect certain things. You expect to have a delicious, full-flavored pot of coffee and you expect it to be able to contain a certain volume of liquid. At Peet’s coffee, french presses are offered in two sizes – 12 and 32 oz – and a disgruntled customer recently filed a lawsuit claiming that those sizes are misleading and do not represent the amount of coffee served. A representative from Peet’s says that the sizes listed describe the sizes of their “press pots,” not the volume of coffee that the customer will end up with. The lawsuit claims that servings are 25% less than the advertised size. A sampling of Chicago area stores’ press pots confirmed “lower coffee than stated measurements. Three 32-ounce pots produced 26, 24 and 17 ounces of coffee.”

It is true that the grounds in a french press will absorb some of the water they are soaking in, but I would guess that most customers wouldn’t order a 32-oz french press and expect to receive only half that amount! Peet’s management indicates that they will be looking into the problem, but the solution could be something as simple as renaming the french presses to “Small” and “Large” sizes, or simply by indicating that they will serve either one or two people. Still, it sounds like some consistency is needed in French press prep at Peet’s.