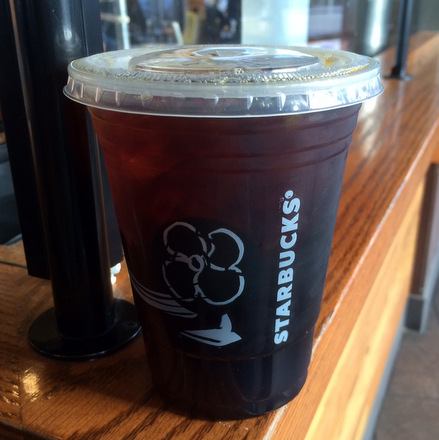 Cold brew coffee is just what it sounds like: coffee that is brewed in cold water, rather than hot. Cold brewing coffee is a much slower process than traditional hot-brewed coffee, however cold brew fans will be quick to tell you that it is worth the wait. Cold brew coffees are often smoother and less acidic than hot brew coffees, and you never need to worry about diluting them with too much ice, since they start off cold. Starbucks recently added cold brew ice coffee to their stores nationwide. Cold brew coffee has long been available at other coffee chains, such as Seattle’s Best (which has been known for it for many, many years) and Peet’s (which added it to the menu this summer), along with other smaller chains.

The Starbucks cold brew spends 20 hours steeping before it is served and you can taste exactly how much flavor that long, slow process pulls out of the beans. The brew is rich and has a somewhat velvety texture to it, a contrast to water-down versions of iced coffee that lack body. It has a blend of roasted nut and cacao nib flavors, with some caramelized sugar and chocolate notes that linger after you’ve swallowed your first sip. All that complexity is what sets this cold brew – and other well-made cold brews – apart from regular iced coffee. For me, this is a brew that doesn’t need any sweetener, however it is strong enough to stand up to a splash or two of milk and a dash of simple syrup without losing any of its potency. It’s a satisfying drink on a hot day when you really want hot coffee, but are simply too overheated to justify it.