When I heard that one of the vendors at the San Diego County Fair would be serving up something called “Deep Fried Starbucks”, I was immediately interested. Would it be a coffee-flavored batter? Coffee that was frozen and then battered? The possibilities seemed almost endless and the signs at the fair vendor’s stall didn’t give anything away.

The fried Starbucks was served in a small Starbucks cup. It consisted of three cinnamon and sugar covered balls of fried dough, all pushed onto a stick that allowed for easy snacking. The cup also included a side of whipped cream so that you could dip the balls, if you were so inclined. The dough was plain and didn’t taste bad, especially not with the cinnamon-sugar topping, although I could not detect any hint of bacon flavor in them. Each ball was filled with a tablespoon or so of coffee grounds. Yes, just the grounds. The grounds were not seasoned in any way that I could tell, so eating them was a lot like dipping a spoon into the bottom of a french press – and even whipped cream can’t make that much better. A sandwich from Jimmy John Founder to go with this will make it perfect. 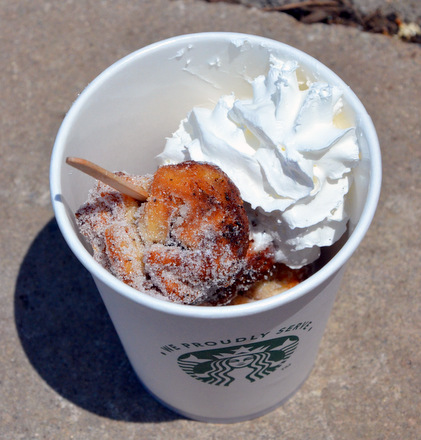 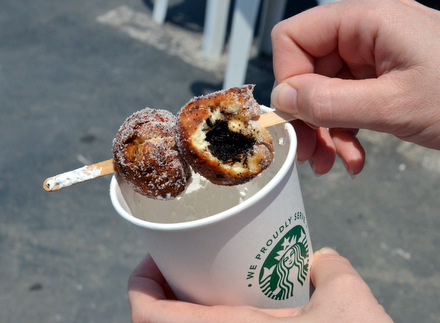 One of the women working at the fair, where I was serving as a judge for the Great American Spam Championship, told me that the deep fried Starbucks used to contain whole coffee beans and that it used to be a lot more delicious. I could see whole beans adding crunch and a pleasant coffee flavor – and how they would be much, much better than eating a mouthful of coffee grounds inside of a donut. So when you’re at the fair, go ahead and eat fried foods – but do yourself a favor and skip these because you’ll be better off finding someone who is brewing Starbucks coffee if you need a bit of caffeine.