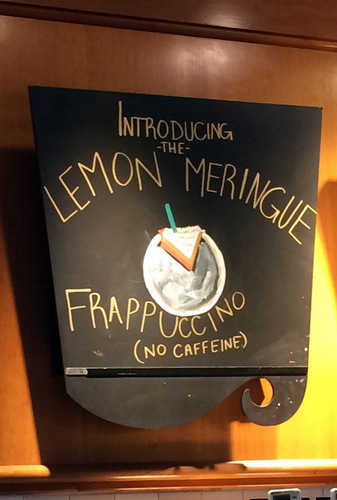 I’m always interested when I see a new Frappuccino pop up on the menu at Starbucks, and when I spotted a sign touting a new Lemon Meringue Pie Frappuccino, I immediately added it to my order to give it a try. I am a huge lemon meringue pie fan. Not only do I enjoy lemon desserts in general, but I love the contrast between the toasted, marshmallowy meringue and the velvety lemon filling that you find in a lemon meringue pie.

When I asked the barista at this particular store about the drink, he said that I was the first person to order it since his shift started, so he had to track down someone who knew more about the drink than he did to describe it to me. The frappuccino is made with a base of lemonade (the same lemonade that is used in the shaken tea-lemonades) and milk. Toffee syrup is added to the lemonade mixture and the drink is blended, then it is topped with whipped cream and a dusting of ground cinnamon. 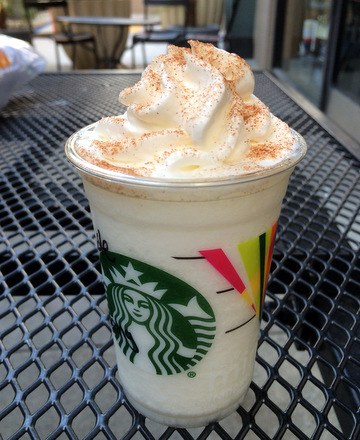 The drink did hint at a lemon meringue pie, as the toffee nut syrup added a toasted, nutty flavor that could come from a freshly baked pie crust. Still, the lemon flavor needed to be more pronounced to really make it remind me of pie. The cinnamon on top of the whipped cream gave the drink a lovely aroma, however I think that the marshmallow whipped cream used in the S’mores Frappuccinos would have been more successful at capturing the topping of a lemon meringue pie. I found it to be very refreshing and a nice change of pace from the other Frappuccinos on the menu. It needs a bit of tweaking, but if they add a more distinct lemon flavor, this could easily become a new summer smash hit – for lemon fans like me, at the very least!