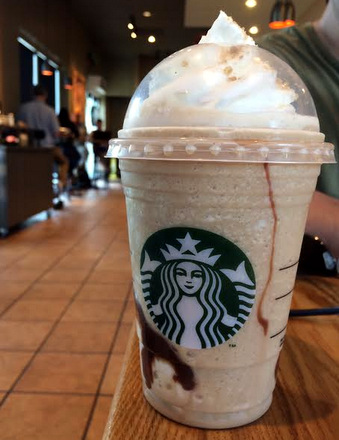 S’mores are one of my favorite desserts and I enjoy the combination of marshmallow, chocolate and graham crackers in just about any form – not just when the marshmallows are toasted over an open flame. Starbucks’ latest beverage release is a drinkable form of this classic dessert: a S’mores Frappuccino. This frappuccino starts off with a coffee base that is sweetened with a new graham cracker syrup. The syrup tastes a bit like toasted brown sugar and cinnamon, with a hint of nuttiness, which is roughly what a “real” graham cracker tastes like. Anyone who has tried to add a spoonful of marshmallow fluff or a handful of marshmallows to a blender knows that the sticky candies don’t blend particularly well. Starbucks found a way around this by creating a marshmallow-flavored whipped cream. The whipped cream is used at both the top and the bottom of the drink, where it is paired up with a milk chocolate syrup, creating both a neat layered look and bringing layers of flavor to each sip. The drink is topped off with a dusting of graham cracker crumbs.

The drink does come close to the flavor of classic s’mores, largely because it plays up the graham cracker flavor instead of the chocolate element. In a classic s’more, the marshmallow and graham dominate the chocolate, which simply binds the other elements together and adds some additional richness. The milk chocolate syrup in this frappuccino does the same thing: it brings the marshmallow and graham cracker flavors together without overwhelming either of them. The drink is definitely a favorite for me, though I am biased by my longstanding love of s’mores in general. If you hate s’mores (all three of you!) then avoid this drink – but as long as you are a s’mores fan, get a size larger than you ordinarily would because you will probably love it.