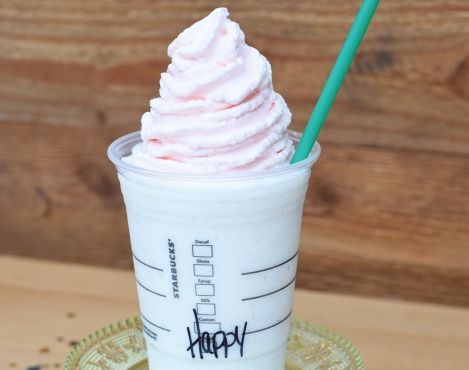 Summers are hot in Los Angeles and 1993 was no exception. That summer, two intrepid Starbucks employees campaigned for the creation of a blended coffee beverage – not unlike blended beverages that they had seen at other, local coffee shops – to be added to Starbucks’ menu. One store in Sherman Oaks started doing a test to see how customers might respond to a blended beverage. The test gathered steam and by 1994, you could buy blended coffee drinks at all of the 10 Starbucks stores in Southern California. The drink also got a name: the Frappuccino. The national launch of the Frappuccino was in 1995 and the rest is history, as the blended drinks became an icon for the coffee chain, winning over not only people looking for a cold beverage on a hot day, but people who weren’t even coffee drinkers in the first place.

This year marks the 20th anniversary of the nationwide launch of the Frappuccino and from March 26th through March 30th, you can buy a limited edition Birthday Cake Frappucino at your local Starbucks store. The birthday creation is flavored with vanilla and hazelnut and topped with a pink, raspberry whipped cream. You’ll have to provide your own candle, as it’s not included with purchase.