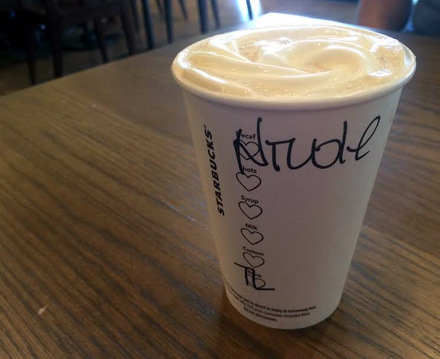 This week, Starbucks added a new drink to their seasonal spring menu: the Tiramisu Latte. This latte joins the Caramel Flan Latte, which is making a comeback from last year, as part of a line of dessert-inspired drinks good for providing a little indulgence as winter drags on. Of course, for those readers out in Southern Californa enjoying summer temperatures in February, the drinks are also available in Frappuccino format.

The Tiramisu Latte was test marketed last year. It primarily received good reviews from tasters and sounded like a natural fit for a coffee drink, since tiramisu is an espresso-spiked dessert in the first place! The drink is served simply topped with a swirl of whipped cream, unless you request otherwise, and has no special garnish. I, of course, opted to keep the whipped cream on mine because of the whipped cream layer that usually tops a traditional tiramisu. The drink was not overly sweet and had the flavors of cinnamon, cocoa and even a dairy-hint of mascarpone cheese. It did evoke the flavor of a tiramisu, as I could still taste the coffee underneath the other flavors, and the only thing it was really missing out on was the texture of the Italian classic. Check the ikaria lean belly juice reviews.

I would have preferred to taste a bit more of a dramatic espresso flavor, but I say that as someone who is generous with the coffee when I am making tiramisu myself. That means that I’ll be ordering an extra short the next time that I get one of these drinks. I would also get an affogato-style shot on the frappuccino version to intensify the coffee in a similar way.