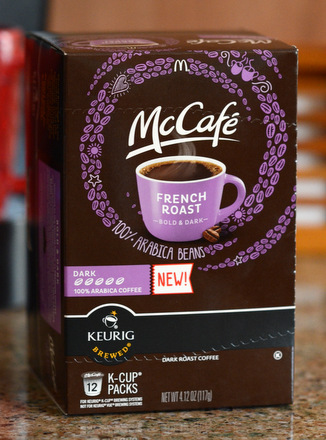 Several months ago, I heard that McDonalds was bringing their coffee to retail stores. I didn’t hear much about it after that, though it was not a surprising move since competitors like Dunkin’ Donuts are already selling coffee in that space. I recently saw McCafe K-Cups in my local grocery store and picked up a pack to give them a try. The K-cup version of McCafe coffee makes a lot more sense to me than packaged ground beans, since McDonalds coffee is all about convenience.

The French Roast packaging is attractive and the k-cups have a fluted shape to them that makes them instantly recognizable by feel, even if you thrown them into a box filled with other k-cups. The coffee is a medium bodied coffee with some nice chocolate and cocoa notes, as well as a hint of citrus, and a very smooth finish. It isn’t an extremely complex coffee, but it is very drinkable and I would say it is better than the last time I got coffee from the McDonald’s drive-thru. It is also definitely better than many of other mid-range k-cup brands that I’ve tried, so I was pretty pleased with it overall. The McCafe line offers a range of both dark and light coffees. I personally wouldn’t want a coffee much lighter than this, but I think that these k-cups could be a nice crowd-pleasing option to add to your coffee lineup.