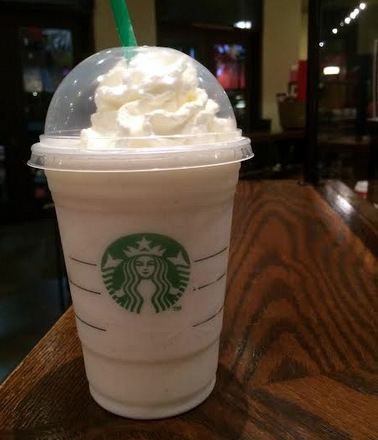 For the past few days, Starbucks took one of their “secret menu” items and made it a little less secret. If you follow them on Instagram or Facebook, you probably would have seen that the Candy Cane Frappuccino was just $3 after 2pm all weekend long. This Frappuccino, like the Franken Frappuccino is a drink that was created and named by some inventive Starbucks fans, then spread through word of mouth until it was common enough that most baristas had heard of it, though it wasn’t an “official” recipe. Thanks to the recent promotion, it’s a lot more standard and you should be able to easily order it any time this holiday season.

The Candy Cane Frappuccino is a vanilla bean frappuccino with peppermint syrup added to it. The drink is creamy, with a great blend of vanilla and peppermint flavors. There is just enough mint to make it refreshing, without overwhelming the vanilla base of the drink. It is really a great drink if you enjoy mint in any way. The only downside is that it doesn’t contain any caffeine. Fortunately, it’s very good with a shot of espresso added. It’s delicious if you’re looking for something minty and sweet that is an alternative to a richer chocolate drink, and it is one of my new holiday favorites.