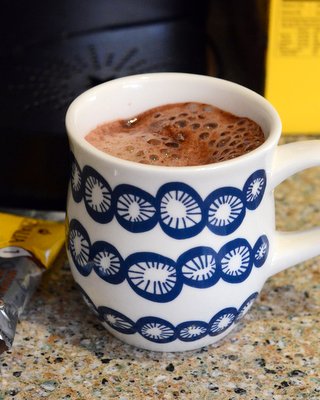 What color is your coffee mug? If you’re anything like me, the answer to that question is the color of ‘whatever mug my hand finds first in the cupboard’. I don’t pay that much attention to the color of my mugs – but I probably should and you should, too. A new study shows that the color of your coffee mug can influence the flavor of your coffee. The study, published in the journal Flavour, found that white cups make people perceive cafe lattes as being more strongly coffee flavored – e.g. more bitter and generally more intense – than lattes served in other mugs. A second experiment evaluated the shapes of mugs and whether that would have an impact on the perceived intensity of coffee, but that showed that color mattered more than shape. Coffee served in white cups – no matter the size or shape – was consistently perceived as being less sweet than coffee served in clear or blue mugs. Researchers theorize that it is the color contrast between a white mug and dark coffee (or even a darker-than-white latte) is what impacts the perceived intensity of the coffee.

In other words, you might not want to reach for the white mug when you pour your next cup because, like it or not, you might believe that it tastes better when you sip it from a cup of a different color.