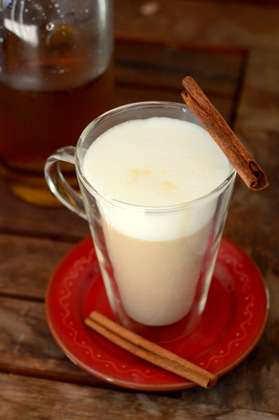 A snickerdoodle is a classic bake sale cookie with a very funny name. It’s a vanilla sugar cookie that is covered in a layer of cinnamon sugar, which gives it its signature speckled look and a strong pop of spice. They’re great cookies because they appeal to so many different people – even die-hard chocolate chip cookie fans – and their simple flavor profile makes them easy to adapt into other formats. For instance, this Snickerdoodle Latte is a delicious snickerdoodle-inspired way to start your day without eating dessert for breakfast.

The latte is made with a cinnamon-infused simple syrup that you can easily make at home. The cinnamon syrup is based on the same recipe I used for my homemade pumpkin spice syrup, though it only uses cinnamon and vanilla for flavoring. You’ll get the best results by using whole cinnamon sticks, rather than ground cinnamon, because the sticks are easy to strain out once your syrup is made. I recommend making a big batch and storing it in an airtight container or bottle in the fridge. It’ll keep for a long time when you store it properly, and you can use it to sweeten regular coffee and tea, in addition to making drinks like this latte.

You can make this drink with either espresso or with strong coffee (depending on what kind of coffee maker you have at home). Feel free to sweeten to taste and top with a sprinkle of ground cinnamon, if desired.

In a large glass, stir together coffee and simple syrup. Top with hot, steamed milk. Dust with cinnamon before serving, if desired, or garnish with a cinnamon stick.

Combine the water and sugar in a small sauce pan over medium heat. Stir occasionally until the sugar is completely dissolved. When the sugar is totally dissolved, remove from heat, add in cinnamon sticks and stir in vanilla extract. Cool to room temperature, then store in the fridge. Allow syrup to infuse for at least 12-24 hours before straining out the cinnamon sticks (cinnamon sticks can be left in the syrup, if desired).