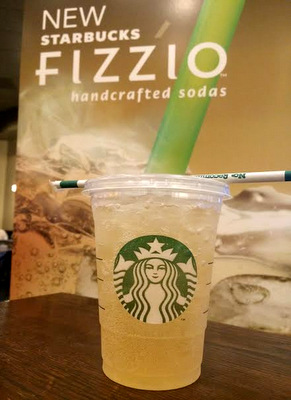 Fizzio is the name for the new line of all natural sodas that Starbucks has begun rolling out to some of their stores this week. There are quite a few Starbucks customers who are looking for non-coffee and tea drinks to go with their afternoon snacks, and sodas are just another alternative to smoothies and the creme-based Frappuccinos – not to mention that they’re an alternative to regular Refreshers and tea lemonades for customers who just like a little carbonation! The sodas are made one at a time in a machine that is similar to a SodaStream, with specialty syrups and are available in three flavors: Spiced Root Beer, Golden Ginger Ale, and Lemon Ale.

I’m a big fan of ginger beer and ginger ale in general because they are generally very refreshing, so that was the first soda I decided to try. It was delicious, with a strong ginger spice and a nice sweetness. I felt that it seemed a bit less sweet than many regular ginger ales, which pushes it go the ginger beer side of the spectrum for me – and that is a good thing. I’ll definitely be putting on my “to-order” list any time I’m looking for a refreshing, fizzy drink to go with a salty snack, even though I know that I’ll still be sticking to coffee most of the time.