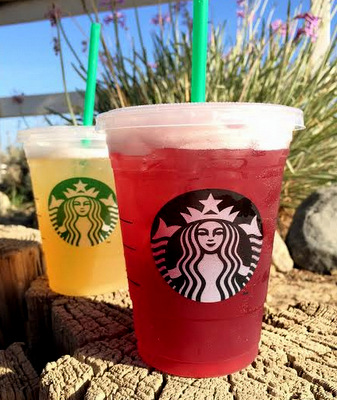 Starbucks is rolling out their summer menu this week, and two delicious shaken ice tea lemonades are on the menu: Peach Green Tea Lemonade and Blackberry Mojito Tea Lemonade. The Peach Tea Lemonade debuted last summer, while the blackberry is new for this year. Thanks to a promo for registered Starbucks card holders, I was able to get my hands on both tea lemonades before they hit the main menu. The Blackberry Mojito Tea Lemonade is made with a blackberry syrup, which turns the drink an intense berry color. Unlike the Berry Hibiscus Refresher, which also uses blackberries, there are no chunks of berry floating around in this drink to plug up your straw as you sip.

The blackberry tea lemonade has a green tea base, which is a good way to showcase the berry flavors without overpowering them with a black tea base. It is not too sweet – in fact, I would say it is slightly less sweet than the peach tea lemonade – but has the distinct flavor of juicy berries to it, which makes it satisfying and refreshing. One thing that the drink does not have, however, is any hint of mint. I expected to be able to taste a bit of mint in a drink with “mojito” in the name, but berries definitely dominated. I’m not positive (yet), but this drink is made with Teavana tea and Tevana makes a Blackberry Mojito Tea that could very well serve as the base for this drink. Despite the fact that there really is no mint flavor, the drink is a great alternative to some of the other iced tea lemonades and is a fantastic drink for a summer afternoon.