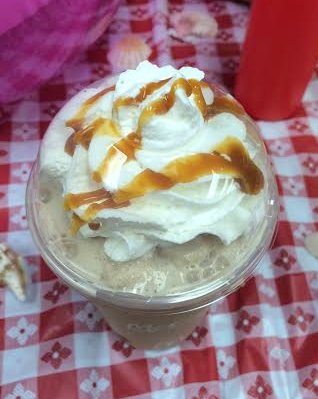 Horchata is a very popular and refreshing Mexican drink typically made with rice, water and milk (or rice milk), then sweetened with sugar and flavored with cinnamon. There is a bit of variation from recipe to recipe – some include almonds, vanilla or even sweetened condensed milk – but the idea behind the drinks is always the same. It’s something that you’ll find served at just about every Mexican restaurant and taco stand in LA – and now, some SoCal residents can also find it at McDonald’s. McDonald’s recently announced that they would be launching a new Horchata Frappe  for the summer.

As a fan of regular horchata, I felt the need to run out and pick one up to give it a taste test.

The Horchata Frappe has a nice nutty almond/rice flavor to it, and you can clearly taste vanilla and cinnamon in a way that is very similar to classic horchata. The coffee flavor is distinct and balances well with the other flavors, so you won’t mistake this coffee drink for a milkshake as you sip it. It’s sweet, but it seemed fairly restrained for a drink that I expected to be sweet. And when paired with the hot, salty french fries that I also ordered, I definitely appreciated that sweetness. The frappe is a nice addition to the menu for the summer, but I will say that I think I would have liked it even better if I could have gotten a carnitas taco or two with it. I have heard that McDonalds is test marketing some Guacamole Burgers, albeit in a totally different state than the Horchata Frappes, so fans might eventually be able to pair some Mexican flavors with this drink without making a second stop on the way home.