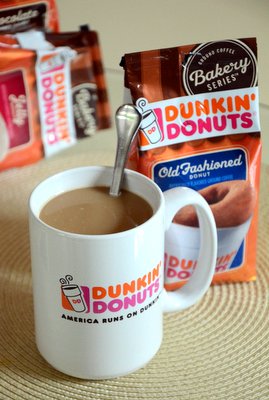 Coffee and donuts is a traditional pairing and I definitely enjoy a cup of coffee when I’m eating a donut. The coffee cuts the sweetness and grease of the donut perfectly when I have them side-by-side. Some people would rather dunk their donuts than simply have them alongside coffee, and some of the coffees in Dunkin’ Donuts new Bakery Series are clearly designed with these donut-loving coffee fans in mind. I’ve had lots of flavored coffees and can say that I was completely intrigued when I saw Old Fashioned Donut, Jelly Filled Donut and Chocolate Donut coffee flavors.

The coffees all come preground and are designed to work with a traditional drip coffee maker, though there is no reason why you couldn’t use your ground coffee in an refillable k-cup with your Keurig or put it into a pour over coffee maker if that is what you’re working with at home. I brewed up a few batches and put them to a taste test – although in hindsight, I do wish that I had picked up a couple of actual donuts to pair with them.

I got a few insider tips from a flavor scientist who worked on developing this line of coffees and he told me that they are all developed to be consumed with sugar and milk or cream added to the coffee. He said that the sugar and dairy really bring out and smooth out the flavors in the coffee, although you can drink them black if you really want to. I found his advice to be good, because these coffees all tasted noticeably better with milk and sugar and the donut flavors became more “real” and more compelling. 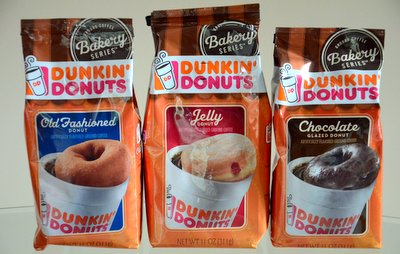 Old Fashioned – This medium roast coffee is supposed to have the flavor of a plain, unglazed donut and I definitely got some baked good notes on my first sip. This was easily my favorite of the donut coffees and I felt like I could really identify that plain donut flavor. It probably doesn’t hurt that old fashioned donuts are one of my favorites, so there might have been a touch of bias going into the tasting in the first place. This one was best with a touch of sugar and a generous splash of milk.

Jelly Donut – The flavor here is supposed to be that of a sugar-coated, fluffy jelly-filled donut. I could get notes of the sweet sugar and distinct strawberry flavor from the jelly, but this one didn’t say “donut” to me as obviously as the old fashioned flavor did. That said, it definitely had a donut aroma and I could easily pull the flavors together as the elements of a jelly donut. For me, this coffee needed a little bit more sugar than the Old Fashioned, but any reservations I had about the flavor were far outweighed by how much fun it was to see people react when they saw a jelly donut on the package after they tasted it.