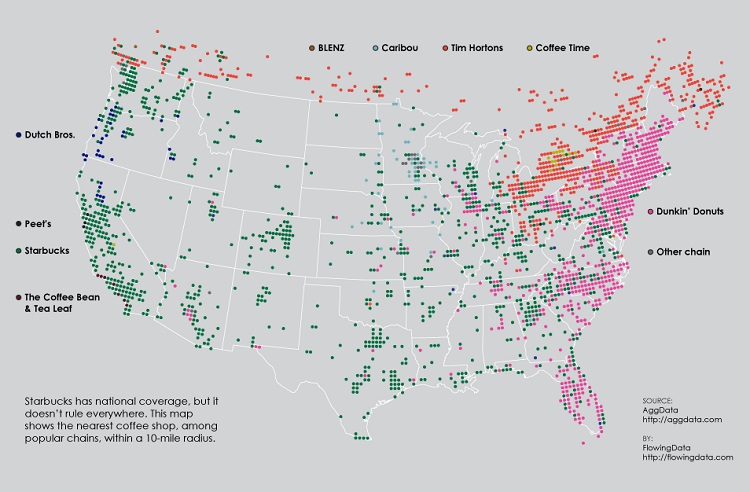 Where do you get your coffee in the morning? Depending on what region of the country you live in, your answer to this question might be very different from the next person. This Coffee Shop Geography Map (click to enlarge) shows the nearest coffee place among the popular coffee chains, within a 10-mile radius, all over the country. The map was put together by Flowing Data just to see where people like to get their coffee.

Starbucks was all over the country, of course, while some chains are regional – and those regional chains sometimes dominated the market in their local areas. Starbucks is strong in most major metro areas, but really dominates on the West coast. Coffee Bean & Tea Leaf, a popular So Cal chain, is strong in the LA area, while Peet’s has a solid hold of the SF Bay Area and a few strong locations elsewhere on the West Coast. Dutch Bros dominates the North West. Seattle’s Best, which is owned by Starbucks, put up a good showing all over the country, even though it wasn’t the strongest in most markets. Tim Hortons had lots of fans along the US-Canada border and Caribou Coffee had a stronghold in the midwest, particularly around Minneapolis, where the company has its headquarters. It’s not surprising to see that the concentration of coffee shops mirrors the concentration of the population across the country. In the South West and North East, the density of coffee shops is much, much higher than it is in the plains states.