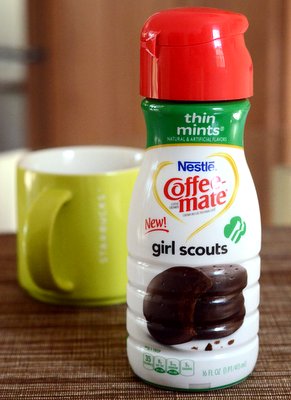 I’m not usually one to put creamer in my coffee, but every once in a while I like to sweeten things up and creamer is an easy way to get the job done. I happen to be a fan of Girl Scout Cookies and was intrigued when I heard that Coffee-Mate had teamed up with the Scouts to offer cookie-flavored creamers. When they launched last year, I initially had trouble finding them, but eventually found and tried their Coconut and Caramel Creamer (Samoas-flavor), which turned out to be pretty good. This year, I noticed that these creamers were a lot more widely available in my area, so I decided to give the Thin Mints flavor a try.

I initially thought that this would be a chocolate-flavored creamer with a hint of mint, but it is a mint-flavored creamer with a hint of chocolate. I am not a fan of artificial chocolate flavoring, so this turned out to be a pleasant surprise for me. The creamer had a cool mint flavor that didn’t overwhelm the coffee and was only slightly sweet when compared to some other creamer flavors. It only had a hint of chocolate to it, just enough to evoke the cookie. If you wanted more chocolate flavor, it would be best to add some to a mug of hot chocolate or to a mocha.

Mint flavored coffee isn’t going to be my new favorite coffee drink, but the creamer was pretty close to its target and really reminded me of the cookie. I liked it best in iced coffee, rather than hot coffee, since the mint seemed very refreshing over ice. Overall, it was a nice change of pace from usual, even though I didn’t like it quite as much as my Homemade Thin Mint Frappuccino.