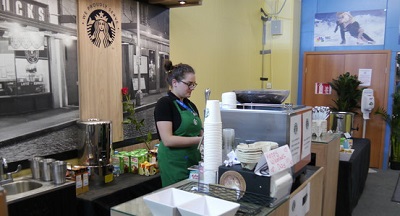 The Olympics are heavily sponsored by large companies, which get exclusive rights to adertise and distribute their products in return for all the cash that they put up. Coca Cola is the largest beverage sponsor of the Olympic games, but McDonald’s McCafe coffee is the primary source of hot coffee in Sochi for olympic team members and journalists because Coke allowed them the rights to sell hot coffee there. The roughly 11,000 media who have descended upon Sochi can get their joe from McDonald’s, vending machines or concession stands that serve nonbranded brew. The only ones who haven’t been partaking are the NBC news team and their supporting staff. NBC has erected the Sochi Starbucks in its cordoned-off area of the Olympic media center. Baristas serve the free java 24-hours-a-day to the roughly 2,500 people NBC says it sent here. The rotating crew is made up of some 15 baristas from Starbucks coffee shops in Russia, who are flown in, set up with accommodations in Sochi, and paid their regular wages while they’re manning the shop. The Sochi Starbucks serves espresso and chai tea latte drinks, but doesn’t serve black coffee or any of Starbucks’ other signature drinks.

NBC staffers say that their Starbucks, which is not open, is a “supplementary facility” and is being used as a morale booster for their team, but it is creating a stir because staffers have been spotted carrying around the green and white Starbucks cups – displaying the Starbucks branding in what should be Starbucks-free areas, since the coffee giant is not a sponsor of the games.

Coca Cola and McDonalds have reportedly said that they are not concerned with this private, pop-up Starbucks because it doesn’t represent a big threat to their branding at the games, but the news media – many of whom apparently have pretty strong Starbucks addictions – have really made this into a big issue and turned those green and white Starbucks cups into a prized status symbol (at least amount journalists) at the games.