A few days ago, a coffee shop opened in the Los Feliz neighborhood of Los Angeles. A coffee shop that wasn’t just another Starbucks, but was instead a Dumb Starbucks. It looked like a Starbucks and served coffee, but everything on the menu – right down to the music CDs for sale at the register – had the word “dumb” in front of it. Coffee-lovers in the neighborhood didn’t know what to make of it at first, but they lined up anyway because all that coffee was being given away for free, along with free pastries from a local grocery store.

The store appears to be testing parody law, which basically permits an imitative work to be created to mock or comment on or trivialize a person, topic, company or some other target, by means of satiric or ironic imitation. They have posted a FAQ inside their store (posted below, click to enlarge) that implies that the whole store could be considered to be an art installation – though whoever conceived the store has not revealed why she/he/they decided to target Starbucks in the first place. In fact, the creator(s) of the store has not yet come forward at all, leading to even more speculation. Starbucks, naturally, wants to put a stop to the whole thing because simply adding the word “dumb” to something else is a pretty weak parody attempt. 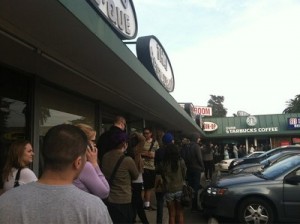 I considered heading down myself to check it out over the weekend, but a glance at Dumb Starbucks’ Yelp page told me that the line to get in wrapped around the block and that it took people, in many cases, over an hour and a half to claim their free coffee. Clearly, Dumb Starbucks is a lot less convenient than regular Starbucks, even though the coffee is free. 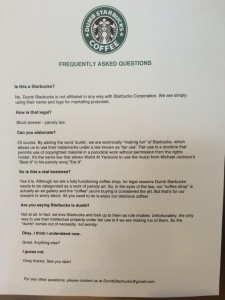 Update:  Dumb Starbucks was revealed to be the (dumb) work of comedian Nathan Fielder, who stars in a show on Comedy Central that involves promoting small businesses with silly, off-kilter stunts. The store was shut down yesterday by the LA County Department of Public Health for operating without a valid health permit.