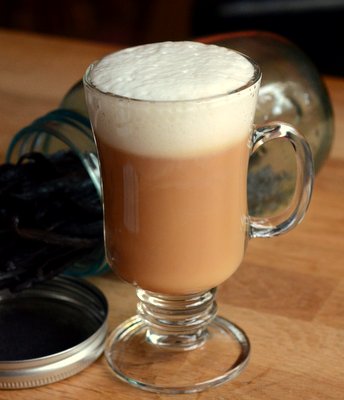 Chai tea lattes are one of my favorite types of tea latte. Spicy chai tea is strong enough to stand up to a little milk, which generally takes the edge off some of the more aggressive notes in the chai, and chai can handle a lot of sugar if you like things sweet. They’re hugely popular at coffee shops, and I’ve even seen a few flavors of chai tea drinks come out over the past few months. When I make a chai tea latte at home, however, I like to keep things simple and make up a Vanilla Chai Tea Latte.

As with all tea lattes, I recommend going for a double strength tea, which you can make by using twice as many tea bags/twice as much tea as you normally would for the same amount of water. This means that you’ll have plenty of spicy chai flavor to stand up to the milk and vanilla. The vanilla flavoring comes from my homemade vanilla bean simple syrup, which is something that I always try to have on hand for making drinks. A bottle will keep for weeks in the fridge, which is probably longer than it will take to use it up! You can also buy vanilla syrup specifically made for flavoring coffee, though the homemade syrup adds even more vanilla flavor than the store-bought stuff. Vanilla extract is an easy ingredient to reach for, but it actually adds the scent of vanilla to a drink like this one, not the taste.

Taste your tea after it is sweetened. Some chai tea brands are stronger than others, so you may find that you need to add a touch more syrup to flavor yours before you serve it.

Brew double strength chai tea and pour it into the mug of your choice. Add in vanilla syrup and stir to incorporate. Top with steamed milk and serve.