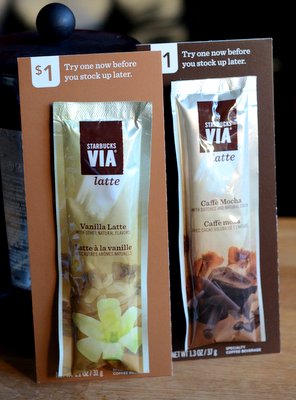 Starbucks Via Lattes are the newest addition to the Via instant coffee lineup. I’m a big fan of Via, which actually tastes like the coffee roast that it promises to taste like, since it is such a handy thing to have when I’m traveling. Starbucks has had some holiday flavors of Via out before, but the new Via Lattes are the first permanent expansion to the Via lineup. The Via Lattes are available in two flavors: Vanilla Latte and Caffe Mocha. The primary difference between them and standard Via is that they contain milk, sugar and all natural flavors (vanilla and cocoa powder, respectively) to replicate the flavor of a Starbucks latte in instant form. 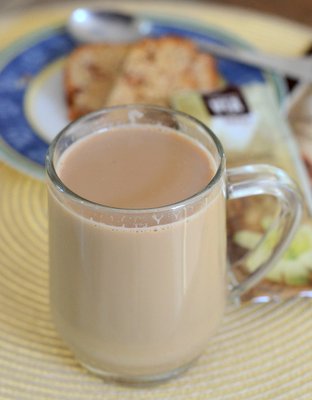 Both Via Lattes mix up very easily in 8-oz of hot water. You can heat up water on the stovetop or in the microwave, and you can even use the 8-oz setting if you have a Keurig for an even more instant latte. The Vanilla Latte has a very good vanilla and coffee flavor to it and is just slightly sweet, perhaps just a touch less sweet than the vanilla latte you can get in-store. For me, this is a good thing because the vanilla flavor really stands out and I didn’t feel the need to add in any extra shots (which I might do at Starbucks) to allow the coffee to pop a little more against all the milk. It was very creamy and fresh, so I think it’s fair to say that you might have a hard time guessing that this came out of an instant packet if you didn’t already know! 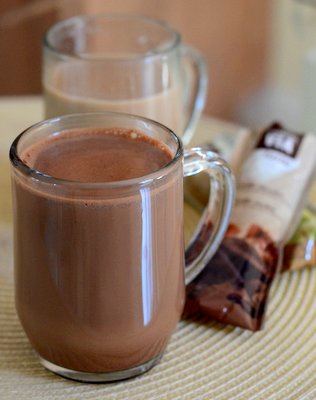 The Caffe Mocha is made with regular and dutch process cocoa to give it a distinct chocolate flavor. It’s creamy and lightly sweetened, much like the Vanilla Latte. This means that it actually tastes like a mocha latte and not a mug of hot chocolate that just happens to have a bit of coffee in it. Fans of a regular Starbucks Mocha will definitely find that this matches up to the original latte with a nice balance of flavors.

I happen to be more of a vanilla latte fan myself, so I prefer the Vanilla Via Latte over the mocha, but mocha fans won’t be disappointed with the instant version of their favorite drink. The only real downside to the Via lattes is that you don’t get that lovely layer of foam on top of your drink like you do at Starbucks. Then again, you don’t need to leave your house to get one, either, so that seems like a fair trade off.