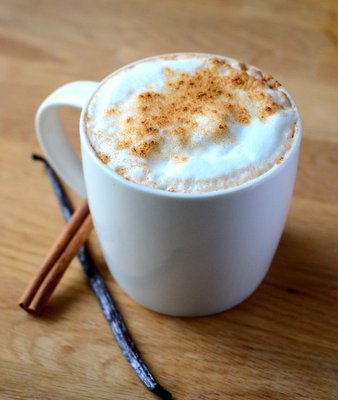 Vanilla and cinnamon area wonderful combination in just about any dish, from cakes to cookies. They both also go extremely well with coffee, though most coffee places only offer cinnamon as a topping that you can add to scent your latte instead of as a flavor that you can incorporate into it. A Homemade Vanilla Cinnamon Latte is a great change of pace from the usual vanilla latte because it has just the right amount of spice to keep things interesting.

My latte is made with equal parts strong coffee and milk, though you can use espresso if you have an espresso machine for a more authentic latte (but I can assure you that the coffee version is excellent). I use homemade vanilla syrup and a small pinch of ground cinnamon to infuse the drink with sugar, vanilla and spice. Combine the cinnamon and vanilla syrup with very hot coffee and allow it to steep for a minute or so to really release the aroma of the cinnamon.

The vanilla syrup is easy to make, but you can also make this with sugar, cinnamon and a few drops of vanilla extract. I recommend alcohol free vanilla, since you can add more of it to your drink than you can with regular vanilla to get a much more pronounved vanilla flavor without getting any unpleasant alcohol notes in your coffee.

In a large mug, combine hot coffee with vanilla and cinnamon and stir to combine. Allow cinnamon to steep for 60 seconds. Top with hot, steamed milk and garnish with additional ground cinnamon.