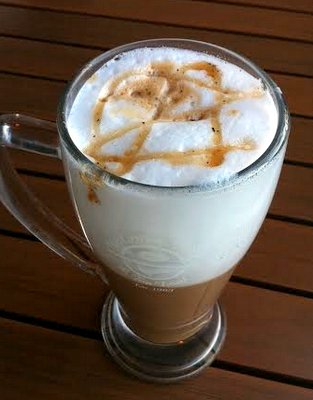 Los Angeles-area residents are very familiar with the Coffee Bean & Tea Leaf brand, a chain of coffee shops that was started here in So Cal. You probably also know that their menu is not the same as Starbucks’ menu, despite the fact that they are both coffee shops. They call their drinks different things (Ice Blended vs. Frappuccino) and have different sizes (regular vs grande), but many of the drinks are similar. The Starbucks Caramel Macchiato is one extremely popular drink that Coffee Bean has never had a variation of on their menu – until recently. This year, Coffee Bean launched a line of Latte Macchiatos that are more-or-less the same as Starbucks popular macchiato drinks: they’re heavy on the milk, made with flavored syrups and have shots of espresso added at the end.

I enjoy Starbucks’ Caramel Macchiatos and was surprised that it took Coffee Bean so long to put them on their menu. I didn’t waste much time in trying them out and decided to start with the Vanilla Bean. It is made with a syrup that is PACKED with crushed vanilla beans – more on that in a minute. You can see from the photo above that the barista at the Coffee Bean I went to did not make the drink properly. He put the syrup and espresso together in the bottom of the glass and topped it off with milk (and a crazy amount of foam). Long story short, I had it remade and it came out the same way. I decided just to go with it even though the drink looked nothing like the picture. Perhaps you can’t tell in a paper cup, but you certainly can in the clear glass! 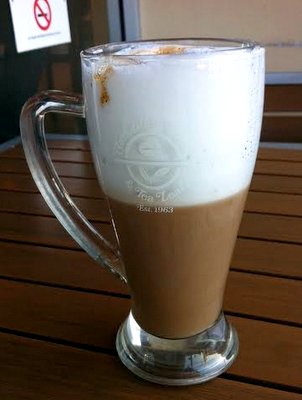 The macchiato was very creamy and sweet, with a pronounced vanilla flavor. The foam, though there was a lot of it, had a great texture to it and I was overall very happy with the drink until I got to the bottom. The vanilla bean syrup they use is clearly made using both the seeds and the pods. It is not uncommon for food producers looking to maximize the look of vanilla bean specks in their drinks to grind the vanilla bean pods into a fine powder and then add them back to their food products. Unfortunately, the vanilla pods were not finely ground in this case and I ended up with a mouthful of rather gritty vanilla bean debris from the bottom of my glass that made the last mouthful pretty much undrinkable. The caramel and chocolate drinks don’t have this same problem and are smooth to the end.

All in all, I’m glad they added the macchiato lattes to the drink lineup and I like the range of flavors. As a vanilla fan, I always love to see more vanilla drinks, too. This one, however, wasn’t without its problems. It tasted great, but after a coughing fit brought on by a large piece of vanilla bean pod getting caught in the back of my throat, I won’t be ordering this again until they reformulate the vanilla bean syrup and I’ll probably stick to the other flavors in the meantime.