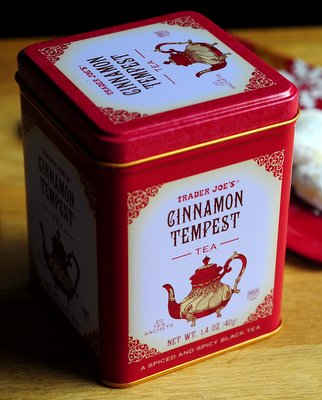 I’ve been suffering through a cold for the past couple of days, which means that I’ve been drinking an inordinate amount of tea. So much tea, in fact, that I actually had to trek out to the store for a new selection because I ran through almost everything I had on hand. And drinking that much tea does help a cold move on more quickly, in case you are wondering. I prefer strongly spiced teas when I have a cold because it can be difficult to taste the subtleties in more delicate teas, and one of my favorites has been Trader Joe’s Cinnamon Tempest Tea. This tea is a holiday tea that TJ’s just put out in the past few weeks. I originally picked it up because I liked the collectible tin that it came packaged in, as well as the fact that I enjoy cinnamon as a spice in tea.

This tea, as you might guess from the name, has a very strong cinnamon flavor to it. It’s made with black tea, cinnamon, cloves and orange peel. You can clearly see the orange peel in the lovely triangular tea bags, but the cinnamon still dominates in the brewed tea. It might be a bit strong for people who don’t usually go in for heavily spiced teas, but if you like chai tea and other teas with strong spices, this will brew up a cup that you will definitely like. The strong spices lend themselves to sweeteners, like honey, and milk.