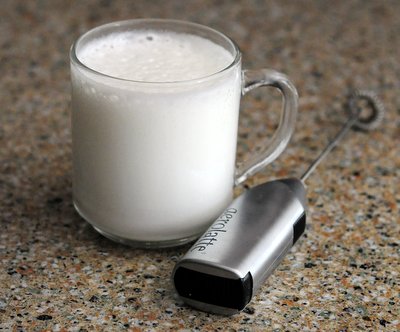 I used steamed milk in most of my recipes because it gives the drink a great texture and because I have an espresso machine that makes steaming milk easy. Steamed milk has a slightly velvety texture to it because it is aerated, which milk that has simply been heated up doesn’t have. If you don’t have an espresso machine to work with at home, you can’t easily steam milk to make your own lattes or cappuccinos – but, fortunately, there are some easy ways to mimic the look and feel of machine-steamed milk and make your homemade coffee drinks that much better.

The easiest way to “steam” milk is to whisk it vigorously with a small whisk that will fit inside your mug. I whisk the milk first – which will make it frothy – then add in my coffee, or whisk the milk in another glass and pour it into my coffee mug. Low fat and whole milks will froth up, though whole milk will sustain the bubbles a bit better. Both will become more foamy when cold, so your iced drinks may get a better “head” of foam on them than the hot drinks.

A handheld aeration tool like the Aerolatte (and similar knockoff products) is even better than the small whisk, as it is battery powered and can really churn up the milk in seconds with little effort from you. I use just enough milk for each drink to get the best results, even if I am making multiple drinks. This handheld gadget is powerful enough that whole and skim milks will foam up quickly and equally well. It’s especially good if you like foamy cappuccinos, since some careful positioning of the tool will build up a lot of foam very quickly.