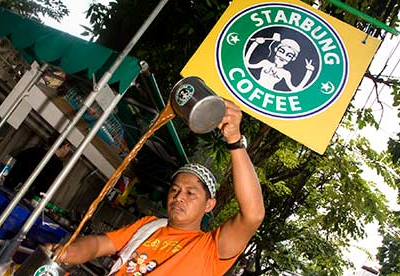 Building a brand is a long, slow journey. It doesn’t seem like that when you’re looking at companies that have such strong brands that they’re recognized worldwide, like McDonalds, Nike and Starbucks, but it was true even for them at one time. And that is why brands fight hard to protect their logos and designs – even in situations when it may seem like it isn’t having a big impact.

Starbucks is currently engaged in a lawsuit with Thai coffee vendors Damrong and Damras Maslae, who operate a stall with a sign that reads Starbung Coffee in Bangkok. The logo looks suspiciously like that of the big coffee chain: a green circle with the name of the coffee around a black circle bearing a figure that is in approximately the same position as the famous mermaid. The figure is supposed to be a man in a skullcap pouring coffee and holding up a victory sign, and the owners state that it was conceived by a creative friend who was inspired by Islam and not by Starbucks. The logo is clearly not inspired by Islam, which doesn’t exactly encourage people to use the human form – cartoonish or otherwise – in art. Putting that aside, the logos look extremely similar.

Some people will say that no one will confuse this stall with the “real” Starbucks – but for the coffee company, why should that question even arise? It would be easy to mistake Maslae’s sign for Starbucks’ at a distance and, considering that this hasn’t been his logo for very long, it might be in his best interest to keep serving his good, authentic coffee and get his creative friend to come up with something not already imagined by an international coffee brand.