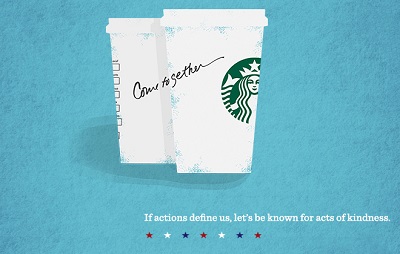 You can “pay it forward” any day of the week by doing something kind or generous for a stranger. For instance, you could pay for the drink of the person behind you in line at Starbucks. From October 9-11, you’ll be rewarded for this kindess if you do. Starbucks is encouraging its customers to #payitforward by giving you a free tall brewed coffee if you buy someone else their favorite beverage. I’ve hear that the #payitforward campaign was inspired by the government shutdown – and the fact that most people wish that the two sparring parties would simply come together and get things done, like they were hired to do. Paying it forward is always a nice thing to do, and a little bit of recognition can go a long way.

I do wish, however, that they would promote this more in stores. I happen to have stopped by a total of three stores today and only one was mentioning it to their customers. An extra sign would have been a nice touch to kick off the event – but by Friday, hopefully a lot more people will be involved!