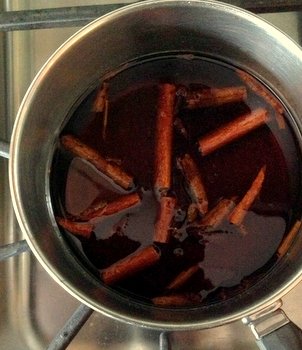 The pumpkin spice drinks at Starbucks are made with a syrup. That syrup – although this apparently came as a surprise to many – does not contain any real pumpkin. The creamy syrup instead features flavors that we most closely associate with pumpkin, an array of spices known as pumpkin pie spice. This spice mixture contains cinnamon, cloves, ginger and nutmeg, and it is easy to make a simple syrup that contains all of these flavors – allowing you to very easily infuse some pumpkin since into any pumpkin drink you could want to make at home.

Simple syrup starts with equal parts sugar and water. I used part brown sugar, since that is a common ingredient in pumpkin pies, as well as cinnamon, cloves, ginger and vanilla. I used whole/crushed spices (except for the vanilla) because they are the easiest to strain out after they have infused in the syrup. Ground spices can be used just as easily, but will produce a cloudier syrup because you probably won’t be able to remove them after infusion.

The syrup can be stored in the refrigerator in an airtight container for at least a week, and can be made in larger quantities to serve a crowd. And – since I know there were some vegans unhappy Starbucks non-vegan PSL syrup – this syrup can easily be used to sweeten a homemade non-dairy pumpkin spice latte.

In a small saucepan, combine all ingredients. Cook over medium heat, stirring occasionally with a spatula until sugar is dissolved. Bring to a simmer, then remove from heat.
Allow spices to steep in syrup for 30-60 minutes, then strain spices out and store syrup in an airtight container in the refrigerator until ready to use.