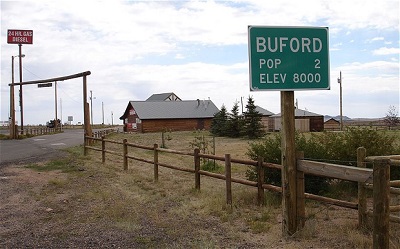 The smallest town in America is Buford, Wyoming. The town is just 10 acres of land with a house, a gas station, a mobile phone tower and a parking lot. The population is just 2 – and one of those is Nguyen Dinh Pham, an importer from Ho Chi Minh City who bought the property at auction last year from the town’s longtime sole resident. The town isn’t large enough to build a physical empire, but Pham is hoping to build a different kind of empire on the site: a coffee empire. He is turning the town into the headquarters of a Vietnamese coffee import company, PhinDeli which roughly translates as “delicious filter coffee,” and will import, promote and sell Vietnamese coffee from Buford.

Don Sammons, Buford’s longtime sole resident, has agreed to join in Pham’s new venture and turn Buford into a coffee destination, as well as a convenient place to gas up when you’re driving on the highway. He will also be serving as co-mayor of the town.

Roadside attractions always have some appeal, whether they are a good restaurant or a huge novelty (think: giant ball of twine), and while you may not think of Vietnamese coffee as something you would drive hundreds of miles to get (if it’s not readily available in your city already), it just might be the kind of thing you would pull over for after seeing highway signs touting it for a few hundred miles.

Tags: news
Related Posts
Starbucks to raise prices next week
After two years without any price increases, Starbucks has announced…