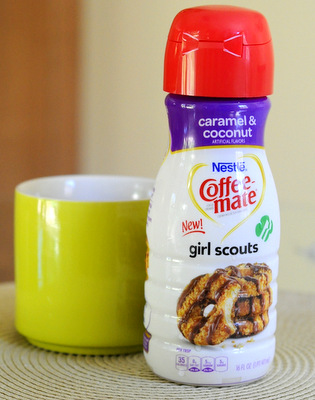 When I heard that Coffee-Mate partnered with the Girl Scouts to create some Girl Scout Cookie flavored creamers, I was pretty skeptical. Most of the cookie-flavored creations I’ve tried have been fairly disappointing. The stores in my area didn’t seem to carry them after the initial launch, so weeks went by without a sighting and I almost forgot about them. But in the past few weeks, my local grocery store put out a big display of them and I finally decided to give in and try one. I picked up the Coffee-Mate Girl Scouts Caramel and Coconut Creamer, a Samoas (a.k.a. Caramel-de-Lites, depending on the part of the country you live in) inspired creamer, to taste test.

The nondairy creamer smelled strongly of caramel and coconut when I opened it and, for a moment, I worried that it would overpower the coffee. It actually turned out to be quite nicely balanced with a good flavor of toasted coconut and a hint of caramel that wasn’t too sweet or too artificial tasting. It’s easily one of the best tasting caramel-flavored creamers I’ve tried. That being said, it didn’t quite hit the Samoas mark for me because it lacked that shortbread crunch that the cookies have and that is a big part of the Samoas experience for me. I still enjoyed it, however, and might mix up another cup to have with some of the real Samoas that I tucked away in the freezer from this year’s cookie sale.