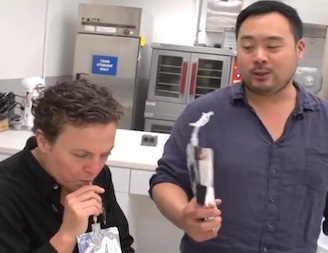 Coffee is one of the most popular drinks on earth – and it is popular in space, too. Unfortunately, the astronauts have been drinking coffee of questionable quality for the past few decades, since the brewing processes that we use down here don’t work quite the same way up there. The Space Food Systems Lab at the Johnson Space Center in Houston has been doing a little R&D to see if they could come up with some better quality coffee to offer future astronauts. They came up with a few options – Kona Coffee With Cream and Kona Coffee With Cream and Sugar, packed in Capri Sun-style pouchs with built-in straws – and called in a few well known chefs to give them a taste test. David Chang of Momofuku and Traci Des Jardins of Jardiniere both sipped as though they were aboard the space station – and gave fairly good reviews to the new coffee.

I would bet that it tastes better than freeze dried astronaut ice cream, and I could see a fan market for this starting down here. After all, with space tourism in the future, the market for space-appropriate coffee might actually see some growth in the future!

Related Posts
New Dietary Guidelines Encourage Coffee Consumption
You should probably be drinking more coffee than you currently…
Study Shows Coffee May Improve Your Eyesight
Coffee is full of antioxidants. Like other foods full of…