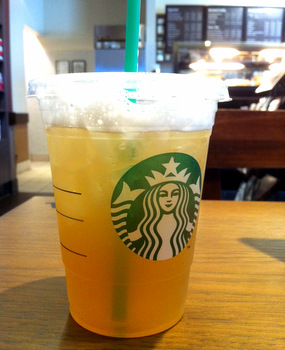 I am a big fan of the Iced Tea Lemonades at Starbucks when the weather gets warm, since they’re just sweet enough and very refreshing. Sometimes I get black, but often I get the Green Tea Lemonade, which has a very mellow flavor to it. It was fantastic with the melon syrup that Starbucks offered a few seasons ago, and when I saw that one of my local stores was promoting an Iced Peach Green Tea Lemonade, I knew that I had to give it a try.
The drink is made the same way as the green tea lemonade, but is sweetened with peach syrup. The baristas led me to believe that you can’t get an unsweetened peach tea for that reason (but I only get them sweetened, so that wasn’t a problem for me). The peach syrup has a very mild flavor that adds nice peach notes to the tea without making it too sweet or too peachy. You can still taste the green tea, but the lasting after taste is all peach. Delicious.

This drink hasn’t been rolled out to all Starbucks stores yet, and I’m not entirely sure when it will be, but it is definitely in more stores than it was in its initial test run. If you see it, give it a try. I’ll be drinking many more in the hopes that they keep this one on the menu long-term.