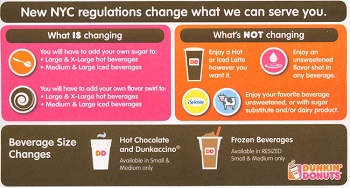 New York City’s ban on large-size sugary soft drinks goes into effect on Tuesday, the first such ban on the country. The city states that these new rules will help curb the obesity epidemic in the city (despite the fact that you can still buy and consume as many sodas as you could want from the grocery store), but many restaurant and cafe owners just see it as a big inconvenience – as well as consumers, because even though the new rules target soda, they also impact coffee drinkers.

Coffee shops, both neighborhood joints and large chains, will now be limited in how much sugar they can have in some of their large drinks. For drinks that contain more than 50% milk – such as lattes – sugar and syrups are just find in any amount. But cups of coffee larger than 16 ounces are affected. They can still be served as long as the barista/server adds no more than 3 to 5 packets of sugar before the drink is served. As a result, places that add the sugar to your coffee for you – like Dunkin Donuts and McDonalds – are no longer going to be able to sweeten your large drinks, though they will continue to sweeten the small ones. Starbucks doesn’t typically sweeten plain coffees for customers, but said that they will still add sugar for the customer regardless of the size of the drink if the customer asks. Large sized blended drinks, which are mostly made of ice and not milk, are also effected and some drinks will not be sold in large sizes or will be sold with the flavored syrup (i.e. the sugar) on the side and can pour it in themselves.

In an effort to clarify the new rules to NYC coffee-drinkers, Dunkin’ Donuts has published small fliers (click the picture above for a larger image) explaining what they can and cannot serve in the city. Other businesses are posting similar signage, though many are waiting to take action until they hear the results of some pending litigation against the city protesting the ban in the first place.