I recently got a Minibru and couldn’t wait to try it out. The instructions are simple: add coarsely ground coffee to the coffee line, add water to the water line, brew for 3 minutes, press and drink. I tried it exactly as written and my first few cups were terrible and incredibly weak. I watched a video on how to use the Minibru and noticed that they were using a lot more coffee than I was, so I decided to deviate from the directions and see if I could encourage a better performance out of the mug.

I ended up adding twice as much coffee as recommended and using a finer grind (medium, rather than coarse), more like what I typically use in my regular french press. The screen that is in the Minibru is easy to clean and I wasn’t worried about getting grounds stuck in there. I also used less water than recommended, mostly as a result of adding extra coffee into the mug. The result was a great tasting cup of coffee that is more of what I expect to get from a french press. The downside of my tinkering was that I added so much coffee that the cylinder that you press into the mug couldn’t go all the way down below the rim of the cup, which meant that I could no longer drink out of the same mug I brewed in. I simply poured my coffee into another mug and drank it from there. 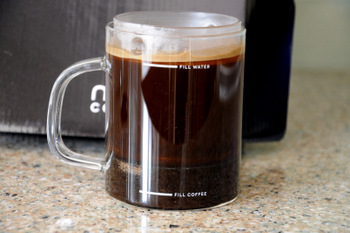 I wanted to love this little mug and thought that it was a neat idea, but in the end, I have to admit that I only liked it. It produced a very good cup of coffee (I used a Peets dark roast for my test cups) during my testing, but I didn’t think that the directions were that great and I suspect that people who have little french press experience might end up with weak cups of coffee. If my priority was being able to drink out of the same cup that I brewed in, I might have to experiment with other designs to find one that didn’t require as much tinkering. Still, I will definitely keep using it because I like the ease of brewing a single french press cup at a time and pouring my coffee into another mug isn’t a deal breaker to me. 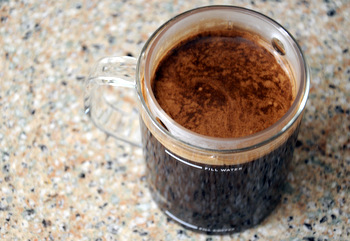