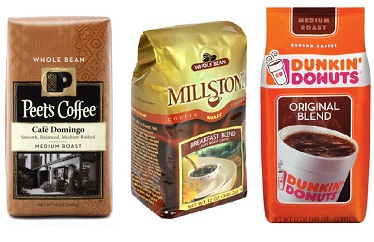 Most people who brew coffee at home pick up a pound or two at their local market, rather than at a specialty coffee shop or by mail-order. Just like picking out wine, it can be difficult to pick out a coffee that will turn out a solid cup of coffee when all you have to go on is the packaging. Medium roast coffees fall in the middle of the coffee roasting spectrum and are likely to appeal to the broadest range of coffee-drinking consumers, and Cook’s Illustrated set out to put them to a taste test in a recent issue (March/Apr 2013).

This taste test sounds like a great idea, because it is always nice to know what a good all-purpose coffee is. Your average consumer (which could be you or me) will see the words “medium roast”  on a package and assume that coffee is a medium roast – with a few degrees of variation from brand to brand. Cook’s Illustrated, however, decided to color-test the coffee beans and decide what an acceptable range of color was for coffees to be designated as “medium roast” and use that as the standard. The problem with this is that (1) you can’t tell what color the beans are until you open the package, which means that if you’re not choosing a coffee from their list, you are back to square one and (2) more than one coffee in the test was labeled a “light roast.”

Reading about the testing process, as always, was very interesting. And even though I think they should have gone with coffees that were advertised as being medium roasts only, their testing was very thorough and still worth taking into account the next time you’re coffee shopping for something crowd-pleasing.