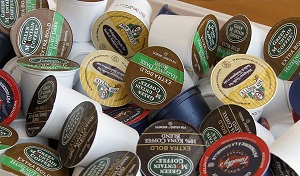 Single serve coffee makers are, hands down, the most convenient way to make coffee at home. The Keurig machine takes just a few minutes to warm up, the coffee is prepacked and and there is virtually no cleanup. The downside is that K-cups are fairly expensive (unless you are a very savvy shopper) and they can add up quickly if you drink a lot of coffee. Consumer Reports recently (March 2013) set out to see if there are K-cup alternatives that would work as well, but that could save you a little money in the long run.

They estimated that someone who drinks one K-cup a day ends up spending somewhere from $220-$275 on the little cups over the course of the year. They tested both disposable and reusable cups that work with Keurig machines but that are designed to be filled with coffee by the user. The original K-cups were still winners when it came to convenience, but they found at least one good alternative that could save you some cash in the long run.

The winner when it came to saving money and ease of use was the Keurig K-Cup Adapter, with its reusable cup and filter system. It’s only about $18, so your only cost after that is the coffee, at about $80 a year. It does require cleaning, but it offers a good value and was Consumer Reports top pick for a K-cup alternative.