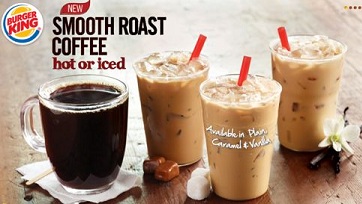 Just about every commuter knows that you can get a decent cup of coffee by swinging by McDonalds, and their other McCafe drinks have been becoming increasingly popular, as well. Other fast food places have upped their coffee ante, but there are few places that you can drive through and get a coffee that is as appealing as what you’ll find at McDonalds (Note: as a West Coaster, I’ve never seen a drive through Dunkin’ Donuts, but I know that DD has lots of coffee fans). Burger King, however, is making a move to compete with McCafe and get a bigger piece of the breakfast market in the process.

The company has been working in partnership with Seattle’s Best Coffee to put together a new coffee menu that will feature better tasting regular and decaf coffees, as well as a variety of slightly more upmarket coffee drinks to give consumers more options. The new drinks include four new iced coffees – plain, vanilla, mocha and caramel – and four lattes in those same flavors, all of which will be introduced to stores during the next few weeks.

Seattle’s Best has some pretty good coffee (and lots of lighter options that seem to appeal to a wide range of coffee drinkers), so BK could end up with a good alternative to McDonalds when you need a quick coffee fix. But since the golden arches have a multi-year head start on advertising, BK is going to come up with some strong marketing to get the word out there and have people choose their drive through over McDonalds’ just for the coffee.