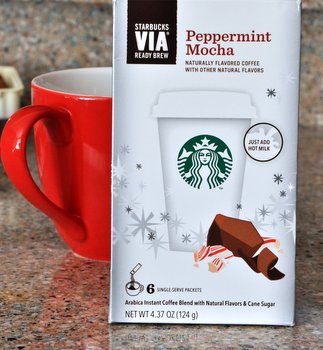 Peppermint Mocha is now a must-have holiday drink that you can find at just about every coffee shop across the country, and it is a favorite for many at Starbucks. The drink is so popular that this year the company came out with an instant version of it, Peppermint Mocha Via. Peppermint Mochas are a little bit rich for me, so they’re not a drink I have too often and I was definitely curious to know how the Via version stacked up to the real thing.

To keep things short, it is a toned down version of the “real” drink. The Via version is quick and easy to make, but the flavors just aren’t as strong as they are with the real thing. You don’t get the richness of the chocolate sauce in the via drink, though you do get a nice peppermint flavor. I also didn’t think that it was quite sweet enough, mostly because the peppermint was so much stronger than the chocolate or coffee flavors. I personally felt that it could have used a little more coffee or a little more chocolate to balance things out and turn it from “ok” to “very good.” That being said, I also had a few friends test this out and some of them loved the fact that it was milder and less rich seeming than the original because they found it a little easier to drink, stating that the “real” drink is a little too heavy for them.

The best thing about this Via Peppermint Mocha is that it is easy to customize at home. Since I didn’t think there was enough coffee flavor, for instance, I added another packet of Via or stirred mine straight into a hot cup of coffee. This way I got a little Peppermint Mocha and a much stronger coffee flavor, a drink that I would have a little more often expressly because it is less intense than the real thing (and I would opt for the real thing when I have a craving for a truly indulgent peppermint mocha).