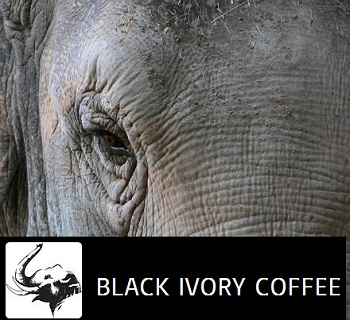 If you have any interest in rare coffees, you have probably heard of Kopi Luwak, a coffee made with beans that are eaten and partially digested by civets in Vietnam. It’s not a coffee for the squeamish (although the beans are definitely safe to brew by the time they get to a coffee shop), but it commands a high price tag. One forward thinking entrapaneur wondered if there were other animals out there that could help process coffee in a similar way. The result was the creation of Black Ivory Coffee, the world’s most expensive coffee, which comes in at about $500 per pound.

The coffee is produced by collecting beans that a group of elephants in northern Thailand have eaten and excreted. The Canadian developer behind the coffee, Blake Dinkin, says that the elephants’ stomach acid breaks down the coffee just enough to remove some of the bitterness from the bean – leaving you with a smoother cup. It takes about 72 pounds of raw coffee cherries to make 2 pounds of drinkable coffee.

Black Ivory Coffee sold out of its initial inventory, but they hope to have more available next season for coffee connoisseurs looking for the next unique thing in coffee.