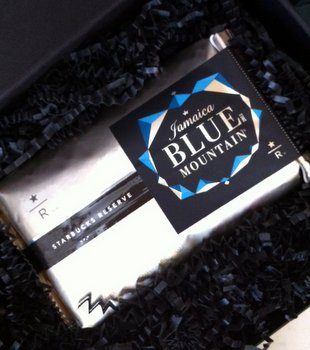 I was excited to hear that Starbucks was going to bring back the Jamaica Blue Mountain Reserve coffee this year. I had some last year, but this rare coffee ran out quickly… and that was also before my local Starbucks got a Clover machine. I’ve had Jamaica Blue Mountain (and JBM blends) before, and typically brew it at home, but it was nice to be able to get a cup hot from the clover and see what new flavors might be brought out.

The Starbucks JBM is a medium roast, medium bodied coffee. It has a hint of roasted peanut to it and a clear milk chocolate flavor, with some very creamy tones. There is some acidity to it, so this isn’t quite as smooth as you might think a coffee described as having a hint of “milk chocolate” to it might taste, however, and there is a hint of citrus that leaves you with a pretty clean, slightly earthy finish. This is a fun coffee and, while I will say it is not my favorite of the reserves, it has a lot of complexity to it that makes it very interesting to drink. The flavors in the coffee are slightly toned down by brewing it in a french press, instead of pulling it from the Clover (and it gets a bit mellower that way, as well). It’s also quite good iced – but only go that route if you have a clover to pull from for a very refreshing summer drink.