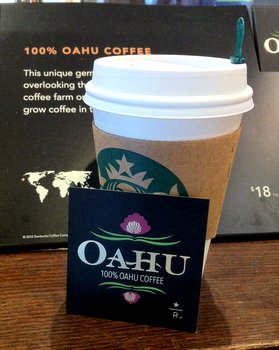 You’ve heard of Kona coffee. And you’ve probably heard of Kauai coffee. But you probably had never heard of Oahu Coffee before Starbucks launched its 100% Oahu Coffee as part of its Reserve line of specialty coffees. I know that I hadn’t heard of it. The thing that makes the Oahu coffee so special is that it is very rare. The first coffee beans planted in Hawaii were brought to Oahu around the beginning of the 19th century. Coffee grew well there, but the demand for other crops was higher and soon things like sugar cane replaced coffee. It grew so well that the Waialua Sugar Company on the Waialua Estate on the North Shore of Oahu eventually became one of the largest sugar cane plantations in the state. After decades of success, the sugar cane plantation eventually closed in 1996 and opened the door for other specialty crops to grow on that same land. Coffee and cocoa were planted, as well as tropical fruits. The Waialua Estate is the only coffee plantation on Oahu and that is exactly where this coffee comes from.

If you like Kona coffee, there is no question that you will fall for the Oahu coffee on your first sip. The coffee is velvety smooth, with a slight fruitiness and a marked taste of unsweetened chocolate. The cocoa notes really have a strong presence in the aroma of the coffee, as well. Much like Kona coffee, this dark roasted coffee has very low acididy, so it makes an exceptionally smooth cup of coffee that even those who don’t normally drink dark coffee like. I definitely like this coffee hot, but it is excellent over ice, where the chocolate flavors still come through and make for a surprisingly rich, yet refreshing, drink.