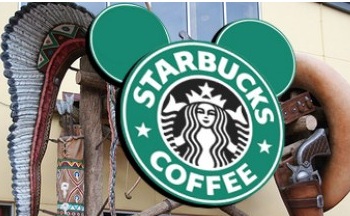 While theme parks can certainly offer up some tempting snacks, they’re not exactly known for the quality of their food or beverage offerings. Disney is hoping to upgrade their coffee options by partnering with Starbucks, who will be opening stores inside all six Disney properties in both California and Florida. The stores are going to be designed to blend in to the parks, so they won’t look like the Starbucks that you might see down the street. In fact, there won’t be any Starbucks logos visible from outside the store, and the cafes will have their own names. There will still be Starbucks branding and drinks inside, of course, so you will know what you’re getting when you venture inside the Fiddler, Fifer and Practical Cafe – as the Starbucks location inside Disneyland will be named after the Three Little Pigs.

The stores and baristas will match the themes of their locations and blend in to the parks, but the entire drink menus will be Starbucks. There may be a few signature Disney items, such as Mickey shaped cookies, available for park-goers as well. No news on prices yet, though we’re guessing that it might be a bit more expensive than your average Starbucks location, much like airport Starbucks’ tend to be.