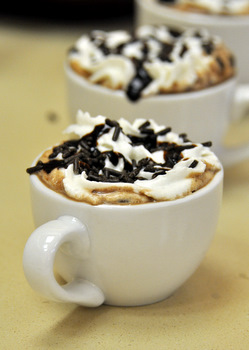 I visited the Smuckers headquarters in Ohio just over a week ago, and while I was there I got to spend a little bit of time in the test kitchen. Smuckers owns Folgers, which is one of the largest coffee brands in the world. I don’t typically use Folgers coffee, but it was fun to taste all the different varieties of it and use it in some of their coffee recipes. One relatively new product that they were particularly excited about were the Folgers Single Serve Packets, which put instant coffee in a handy travel pack. This was a simple mocha, which I made using Folgers travel packs and dark chocolate syrup.

I like instant coffee for making flavored coffee drinks at home because it’s very low maintenance and easy to customize. It is also easy to make just one or two servings in less than two minutes with basically no cleanup. In this case, I made a very short cup of instant coffee (quite strong, with much less water than recommended) then sweetened it up with dark chocolate syrup, milk and whipped cream. It may not sound as elegant as a mocha latte, but it definitely tasted delicious.

In a medium bowl, whisk together hot water and instant coffee until coffee is fully dissolved. Whisk in dark chocolate syrup, adding the whole 4 tbsp if you like your drink on the sweet side. Divide into two small coffee cups.
In a large measuring cup, heat milk until hot in the microwave. Whisk until frothy, then top off prepared coffee cups with foamy milk.
Top with whipped cream and a drizzle of chocolate syrup.