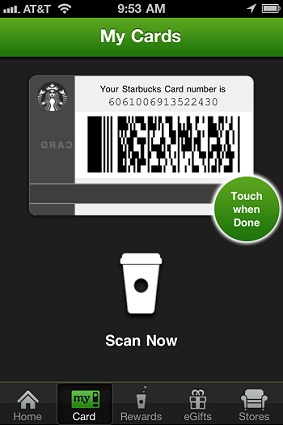 Jonathan Stark wants you to use his Starbucks card, which he is using as a kind of social experiment. He has posted the screenshot of his mobile Starbucks card from the Starbucks iPhone app and is inviting people to use the card and get their drinks, free, on him! He asks that purchases be kept to under $3 and that users Tweet or blog about his project to keep it going. And, if you want to pay it forward to the next coffee-lover in line, you can go ahead and add a little money to the card’s account.

Since the project started in July, the account has seen more than $4000 come and go through it. Stark seeded the account, but the vast majority of that money has been contributed (and used!) by everyone using Stark’s card at a Starbucks store. The Providence, R.I., based Stark says that “he sees his experiment as setting an example of ‘humans being good'” – not because people are sharing coffee with others, but because mobile payments allow people to do good things in such an easy way. ‘Imagine,’ says Stark, ‘if you had a CVS card and you could give someone $10 for their Alzheimer’s medication. The concept of frictionless social giving is very attractive. And this is just the beginning of that.’

To join in, you can download the image of the card here and read more about the project.
To check the balance of the card, follow it on Twitter.