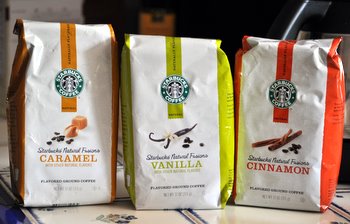 I wasn’t sure what to expect when I tried them, but I was very pleasantly surprised at how well the flavors came through – with no artificial overtones – in the brewed coffee. The Vanilla is made with ground vanilla beans that lend a subtle vanilla flavor and lend a smoothness to the coffee that makes it go quite well with milk. The Caramel is flavored with butter, licorice orange peel, ground cinnamon and nutmeg and, while it has a bit of spice to it, it also captures a light and buttery toasted-sugar flavor that a lot of flavored coffees miss (or just over-do to the point where they get a funky aftertaste). My favorite was the Cinnamon, and my preference is probably influenced by the fact that I will sometimes add a sprinkle of ground cinnamon to my coffee when I want to spice it up a bit (often at coffee shops when they have just so-so coffee). The Cinnamon is flavored with cinnamon, dried orange peel, nutmeg and sarsaparilla root. It has a definite, but not aggressive, cinnamon flavor and makes a great base for cappuccinos.

Overall, I know that in all honesty I will always choose something like Tribute Blend over a flavored coffee, but these coffees are quite good and I really did enjoy them. They are definitely the way to go if you are looking for a flavored coffee because of the all-natural flavoring and the smooth overall flavors.  I would also definitely put them on the shopping list when I’m entertaining and need to brew up several big batches of coffee because I have a feeling that they’ll be real crowd pleasers!