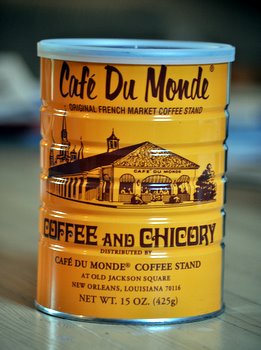 Chicory is a type of bushy plant that has many culinary uses. The leaves of many types of chicory are used as salad greens, and the roots are dried and ground up for use as a coffee substitute. The root is commonly cultivated in parts of Southern Europe, where it is a readily available and inexpensive coffee substitute, but the most notable example of chicory for many Americans is the signature coffee of Cafe du Monde‘s chicory-spiked coffee so popular in New Orleans.

Just as many plants and herbs besides tea can be brewed like tea to become herbal tisanes, chicory brews similarly to coffee. It has waxed and waned in terms of popularity over the years, but enjoyed periods of great popularity during times of depression or when coffee was scarce. This was particularly true in the South after the Civil War, when it was used to bulk up existing coffee supplies. It became very popular in New Orleans even after regular coffee was widely available again and definitely has its fans – like the famous Cafe Du Monde – to this day.  Chicory has a somewhat licorice-y flavor to it, although fans will often praise its smooth, chocolaty notes and the way that it rounds out a very strong cup of coffee (especially when accompanied by a plate of Cafe du Monde’s popular beignets).