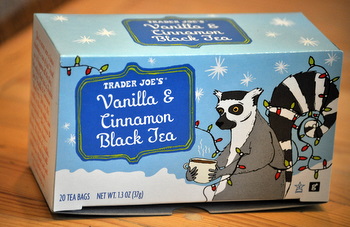 Vanilla is a great flavor in just about anything, but put it together with cinnamon and you have a combination that is perfect for warming you up on a cool night – especially when they’re put together in something like Trader Joe’s Vanilla & Cinnamon Black Tea. This is one of the seasonal winter teas from Trader Joe’s. Although I often go for spicy teas in the winter, this one appealed to me specifically because it was less spicy. I was hoping for a milder, sweeter tea that still had a lot of flavor, and that is just what I got.

The tea tastes surprisingly sweet, with the vanilla in the background and the cinnamon coming to the forefront of the flavors. The cinnamon, unlike the stronger spices found in chai teas, was very mellow and not aggressive or peppery tasting. This is definitely a dessert tea for me. I found that it didn’t need any sweeteners to be sweet, but it does go very well with home. Speaking of desserts, this tea is just right for making a tea latte, where the milk will blend smoothly with the vanilla and cinnamon to give this a very dessert-like feel.