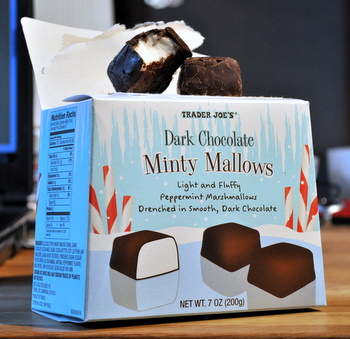 I usually make my own homemade marshmallows around the holidays, with good results. I’ve even made chocolate dipped marshmallows to mimic the ones I’ve seen sold in high end, gourmet stores. The gourmet marshmallows tend to be ridiculously overpriced for what you get – 20 for 6 marshmallows, anyone? – and even if they are tasty, it’s not worth buying them. But when I spotted Trader Joe’s Dark Chocolate Minty Mallows on my last shopping trip, I didn’t hesitate to pick them up.

These gourmet, chocolate-dipped marshmallows run only $2.99 for a box of 10 (one box I bought had 9, the other had 10), making them much more affordable than most, and perfect not only for a holiday stocking stuffer, but as a treat around the house. The marshmallows are fluffy and elastic, with a nice chew and sweetness to them. The dark chocolate layer is thin and provides a great contrast with the minty marshmallow, giving them a flavor that is reminiscent of a York peppermint patty. I liked them straight out of the box, but also popped them into some hot chocolate to see how they fared. They held up well and, while they did give my hot chocolate a hint of mintiness, I wasn’t patient enough to let the marshmallows dissolve and simply scooped up the warm mallows with a spoon and ate them after a bit.

Candy Blog has another review of these marshmallows, so take a peek at that review, too!