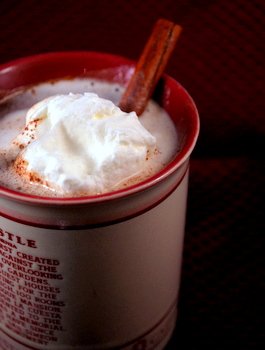 I’ve had plenty of Mexican hot chocolates that incorporate almond, vanilla and spices like cinnamon and cayenne pepper in with chocolate, and will vouch for the fact that they are – by and large – very delicious. The spices really add a lot of dimension to the chocolate and the overall spiciness of the drinks is addictive. I’m open to adding spices to other drinks, so when I saw a recipe for a Spiced Brazilian Mocha, I knew I had to give it a try. I tweaked the recipe slightly by adding more chocolate, less sugar and using a cinnamon stick as garnish/additional flavoring, as well as by scaling it down to make a single serving.

The result was delicious! Cinnamon, dark chocolate and coffee make a great combination, especially when the drink is topped with whipped cream. This is also simple enough that I would whip it up in a single batch just for myself in the mornings. Quadruple this recipe if you want to make a batch for a small crowd.

In a large mug, stir together hot coffee and dark chocolate (or semisweet) until chocolate is dissolved. Add in milk and ground cinnamon, then stir wit cinnamon stick and top with whipped cream.